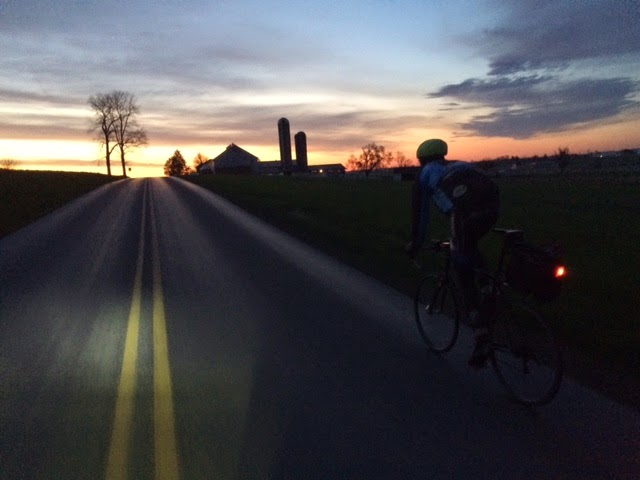 Local PA Randonneur  Gavin Biebuyck set out this past weekend, to Crush the Commonwealth -- a 400 mile challenge, to ride unsupported from Pittsburgh to Philadelphia along Bike Route-S:
http://www.crushthecommonwealth.com/

Gavin sent me the following ride report of his epic ride:

Summary
Finished the 2015 Crush the Commonwealth with Brett from Philly in 30:40 Saturday morning at the Liberty Bell.  Norman S welcomed us and we snapped photo at the Bell with my PA Rando jersey on - first time I took my long-sleeve jersey off in the 30-miles of chilly/cold riding!  Conditions were great this year with the GAP trail dry and as hard as it can be, and with tailwinds from Rockwood to Somerset and all the way to York.  Couple randonneurs represented with Erica from NJ finishing strongly despite her first time and "flying blind" having left her Garmin and other supplies at the bus station.

Tom Oswald's sub-30 hour time from 2 years ago was not threatened and truly remarkable considering I had help from Paul and Brett all the way from Breezewood whereas Tom rode alone.  Got very cold Saturday night and every piece of clothing and fresh set of hand and foot warmer pads applied in York.  Paul too cold and drowsy to continue so felt bad leaving him on the floor at the York Sheetz at 3 am.  After last stop at Morgantown Burger King where Brett remarkably consumed 3 breakfast sandwiches, Brett and I decided not to try to hammer and break 30 hours.  Rode the Route 23 rollers, the annoyingly overpriced-SUV-congested Phoenixville streets, and the equally triathlete-congested Schuylkill Trail at a leisurely pace of 14 mph or so and chatted about bike's and road race training.  Brett is a Cat 1 racer who has ridden kermesses in Belgium.  Despite his 6'-5" height he has the most aero bike position I have seen - as flat a back as Zabriskie or Julich.  Something to do with the no-rise stem and likely 12" drop from saddles to bar!  It seems every racer in Philly know Brett because I heard at least 7-8 passing bikers greeted him on our way in from Manayunk.

The details:
About 40 bikes with lights blinking in the dark at The Point fountain at 5 am Friday morning.  We were escorted to the GAP through 15 miles of bike trails to McKeesport by Pgh bike enthusiasts (about 35 CTC starters I think?).

"RAAM guy" Jason started very fast and broke away on his aero bike as soon as we hit the GAP after the neutral roll-out.   By mile 40 I was riding with large group of 15 or so including some teammates from Baltimore Bike Club and some other very determined racer-looking guys weighing 140-160 pounds.  Pretty intimidating compared to the normal turnout.  We passed Jason at about mile 50 - he was having technical issues with tri-bottle holder and the GAP knocking his bottles off.  He also had a flat (tubeless) and replaced rear 25mm tire with a 23mm which couldn't have helped on the GAP.  We could manage 15 mph and not a bit faster for 106 trail miles!  At Ohiopyle at mile 65, 5 hours in, we made our first stop.  I grabbed a bottle and a banana bread loaf and hit the trail in first place after a 10-minute stop.  The BBC team and others sat down for breakfast - I never saw them again. 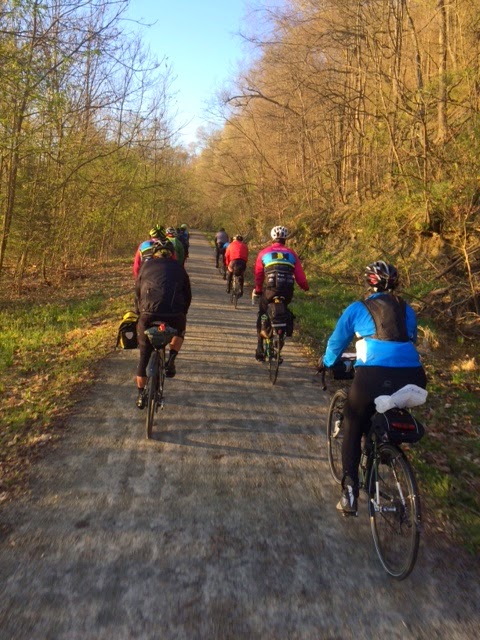 After a nature break at mile 80 I was joined by group of 4 including Jason and Erica.  Despite dry conditions the last 20 miles to the end of the GAP at Rockwood sucked as usual and my fat tires (650b x 42 at 45 psi) were the secret weapon as I found myself alone and 5 minutes ahead of Jason, Erica, and 2 Pgh mountain bike guys.  After bathroom break, switching shoes, and lubing chain at end of trail (7 hours in, mile 106) I rode hill out of Rockwood with Jason with a nice tailwind.  I was feeling good but Jason had suffered on trail with skinny tires and lagged behind me and I did not see him at Somerset where I stopped for about 40 minutes at mile 116.

At Somerset Sheetz, Brett and Paul from Ohio rolled in and I rode with them for 20 miles trying to catch Erica and the 2 mtnbike guys before I flatted (rear small piece of glass - 9 minute diagnosis/tube change).  I rode 30 miles alone to Bedford with glorious tailwind and then caught up with Erica and noticed the Pgh mtnbike guys just rolling out of a convenience store.  Erica stopped at Bedford Subway and so 3 of us rode to Breezewood.  Turns out we leapfrogged Brett/Paul and Jason at Bedford and 3 of us arrived at Breezewood (mile 177) in first place. 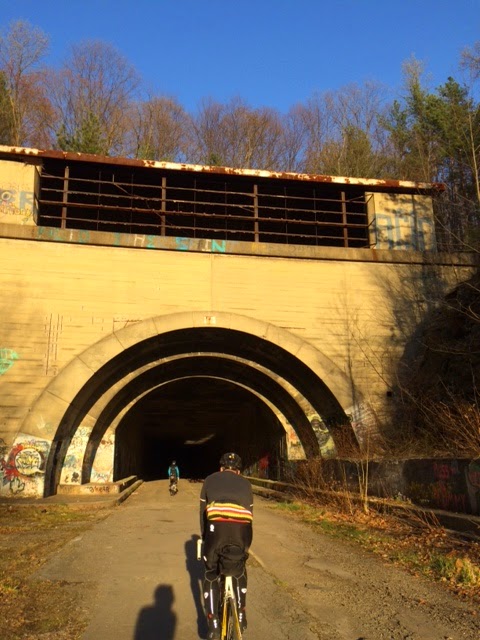 After Brett/Paul/Erica arrived the 5 of us (Erica stayed) left Breezewood  about 10 minutes after seeing Jason ride by the Sheetz - we never saw him again after that and assumed he was going to ride to first finish as he had told us his plan was to ride with minimal off-bike time.  Five of us rode the pot-holed, grassy Abandoned Turnpike 9-mile stretch together.  Creepy in the two tunnels and group of locals with flash-lights strolling the 6,300' tunnel as we rode through!  The 2 Pgh guys had a room in Chambersburg and were riding very strong so we "let them go" and Paul/Brett and I rode smoothly to Chambersburg (mile 228), after suiting up in more layers and reflective gear at top of Cowans Gap (mile 206).  Cold but pretty 58-mile ride through Adams County rollers to York.  At York Sheetz with about 100 miles to go we were very cold and drowsy.  Paul could not go on so Brett and I rode the final stretches together. 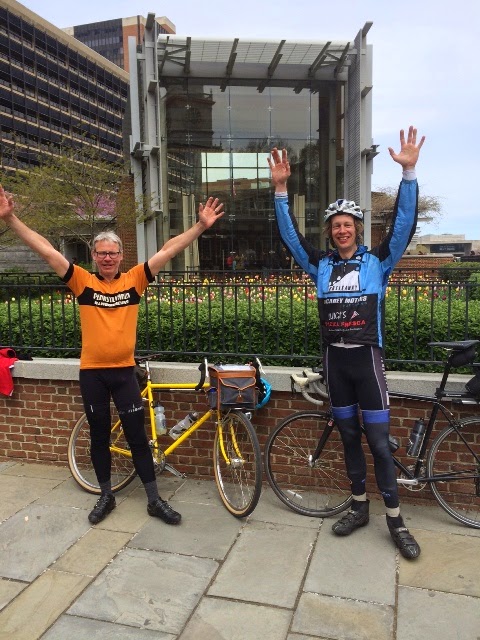 At the finish was a guy waiting for Jason - we were surprised he did not finish ahead of us because we had not seen him on our ride in.  Realized we finished first and a little guilty about not pushing it more in the last 50 miles.  Apparently Jason got lost and his front light failed causing him to ride slow at night.  He finished about an hour after us just before Stef Burch finished - reigning champion Stef was first female finisher yet again!

All in all felt pretty good but the constant rollers and out-of-saddle efforts have my knee very tender.  Carrying extra set of shoes in Camelback backpack not such a good idea - neck and upper back pain required some Aleve on the ride.  I rode the first 106 miles on the GAP in sandals and then put my Northwave shoes on and carried the bulky sandals for 275 miles.  Did not use my small ring and got by with a 48x30 low gear for the hills around Somerset, Bedford, and to Cowans Gap.  382 miles and 15,000' elevation gain per Brett's Garmin.  25:30 hours riding time averaging 15 mph.

Apart from poor shoulder and busy Route 30 stretch around Chambersburg for 30 miles, the route was not bad - highly recommend riding Chambersburg to Lancaster at 1-5 am when there are no cars on the road!  Lots of twigs, branches on the GAP so I am glad I removed my fenders before the ride.

Hoping not to ride CTC again as I have ridden both ways.  Good company riding with Bob and Nick from Philly, Stef B, Erica, Paul, and others.  I think riding with others and talking through the night are the key to riding straight through.

Posted by Tom Rosenbauer at 6:53 AM