The route features four epic climbs separated by plenty of rolling farmland and little else.  The finish at the Rusty Rail Brewery* provides an excellent opportunity for carbohydrate replenishment and a time to tell tall tales (some of which might be true).  You can get a sense for what awaits you by reading the ride report from the inaugural event.   Additional details and the registration links are available on the PA Randonneurs website.  Registration is open through Wednesday, September 8.  Don't delay; the registration deadline will be here before you know it.

September also marks the 100th birthday of the Audax Club Parisien (ACP).  Perhaps you read about this event this past winter in American Randonneur (see article on p. 10).  In honor of the occasion, finishers of the Rusty Rail brevet will receive a special medal. 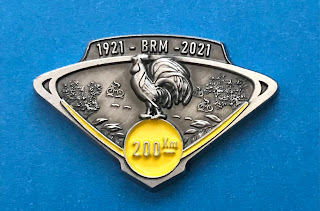 *While we had high hopes of a return to normalcy, it appears that we are not out of the pandemic woods just yet.  For now the planned finish is at the Rusty Rail, but that may be impacted should the brewery shut down or be forced to dramatically curtail indoor patrons.  Be prepared for changes and hope for none.  I will provide any updates here on and the website as they occur.  Don't throw away your cache of masks and hand sanitizer just yet. You might just need them in September.

Results for the August Hawk's Nest Classic R-12 brevet have been posted on the website.  Please review the results to make sure they align with your recollection.  Results will be submitted later in the week and will become official once certified by the ACP.

It is hard to imagine weather conditions more favorable for an August brevet.  Although temperatures were in the 80’s and humidity was high, a slight overcast kept the sun at bay and a light headwind in the afternoon kept cyclists from riding in “stale air”.

First finisher Scotty Steingart was well on his way to shattering his already impressive course record when he was bitten by the flat bug.  Scotty had a small sidewall tear that was nearly invisible and caused him to exhaust his supply of spare tubes.   Before his flats, the organizers were tracking his progress on his Wahoo locator and were amazed that he had averaged 19.8 mph through the first 110 miles of the course  – truly unbelievable.  Unfortunately, Scotty had to walk the last 5 miles, but he still managed to finish in just over 8 hours.  Chapeau Scotty!

Oliver Zong gets the teammate of the day award as he stayed with a struggling Paul Weaver.   Paul had to be adieu to Oliver after his legs locked up with cramps at the base of the Old Mine climb.  Oliver soldiered on to the finish but Paul had to terminate his ride.

Greg Keenan managed to finish yet another challenging PA Rando event on a fixed gear bike.  As Henri Desgrange so famously said: "I still feel that variable gears are only for people over forty-five. Isn't it better to triumph by the strength of your muscles than by the artifice of a derailleur?"

All other starters successfully finished and celebrated their accomplishments with good cheer and burgers, ice cream and pretty much everything else the good folks at the Village Farmer cooked for us.

We’ll see y’all in September for the beautiful and challenging Rusty Rail.  Registration is open  on the website.  The September brevet also coincides with the 100th anniversary of the first ACP brevet.  A special award medal has been commissioned for finishers of brevets on September 11.  More details will follow, but make a note of the significance of the September event for now.