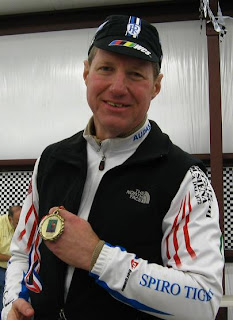 Local PA randonneur Rick Carpenter successfully completed his RAAM qualifier at the Sebring 12/24 race this past weekend.
Rick reports: "... At 06:30 on Saturday we started in the dark with three 3.77 mile laps on the Sebring racetrack, then one 89 mile out and back road “long loop”, for an aprox. total of 100 miles. We then transitioned to the 11.67 mile road “short loop”, on which I completed nine laps (or aprox.105 miles).
Upon completing my 9th lap on the “short loop”, at around 17:45 we were diverted back to the racetrack to ride the remaining event until the cutoff time of 06:30 Sunday. I completed a total of 54 laps on the racetrack (or aprox. 203.4 miles) at precisely 06:09:28 Sunday morning, when I ended my 400 mile RQ campaign with two “insurance laps” thrown-in.

It was very cool by Florida standards, starting with a temperature of around 36 degrees 06:30 Saturday morning, reaching a high of around 58 deg F Saturday afternoon, then dropping down somewhere past freezing early Sunday morning (as evidenced by the frost accumulation on the gear bags).
In summary, over my total elapsed time of 23:39:28 I completed 408.4 miles, for an overall average speed of 17.26 mph."

Congratulations to Rick, for this outstanding accomplishment!  And stay tuned for updates from Rick as his 2010 RAAM campaign continues ....

*** Ride Report 6/6/10 with updates (6/8) ***
Preliminary results have been posted at:
http://users.rcn.com/trosenbauer/PA200k_Results100605.pdf
... please let me know of any corrections or other issues.  Results will be submitted to RUSA shortly, and will then become final, pending RUSA/ACP validation.

All 11 starters completed the ride within the time limit for another 100% finish rate -- Congratulations to all the hardy randonneurs for getting around the course in the hot and humid weather conditions we had.  The average high temperature for this time of year is in the mid 70's -- we reached that mark just shortly after the start.  But thankfully, some cloud cover and a nice breeze kept temperatures manageable for the early climbs up Fox Gap and Lommasson's Glen.  But by the time I reached Stewartsville at mile 58, I was ready for my first ice sock, as the on road temperatures crept into the high 80's to low 90's, with plenty of humidity.  The forecasted thunderstorms never materialized, although I did feel a few rain drops near Belvidere.

By the finish, I was glad that today's ride was only 200k.  Our neighbors to the south, the DC Randonneurs, were running their 600k this weekend, and they probably had at least the same amount of heat, and if anything, even more humidity to deal with.  Riding a long brevet in those conditions is certainly a tough proposition!

Your's truly, completed an Eastern PA R-12 series with this event.  My riding partner, Bill Olsen was the first to congratulate me, when we passed through Carpentersville, and I remarked that I could walk home from here and still make the time limit.  Bill completed his 200k taper down ride in preparation for the Shenandoah 1200 next week.  Other Eastern PA participants headed out to the S1200 include Gary Dean, Ed Dodd, David Goodwin, and Larry Midura.  Best of luck to these riders! (hope the weather cooperates this year)

Shane Beak and Mark Kaufman are both well along the way on their R-12 series.  Shane has just 2 more months to go before completing his.  Mark started his R-12 series last December, on that unexpectedly snowy event.  That was Mark's very first brevet and, along with Shane, is on track to complete an R-12 after the first year of riding brevets.

First finisher Don Jagel (who made it around the course in an amazing 8:32, considering the conditons) writes: "...the fresh asphalt on Lommason Glenn Road made it seem much flatter, almost coasting uphill....It is always good for me to get down into the Milford, Frenchtown, Stockton area as I spent a good part of my life there...Nothing beats a good bike ride outside your front door! ... I finished a 15 minute lunch break in Stockton, and was getting ready to leave when I ran into Linda McAdams.  She was out doing a test ride on dirt roads of her bike set up in preparation for the D2R2...I rode with Norman Smeel up until Fox Gap.  I think he said he was riding a 39 X 23.  Wow!  I'm not able to push gears like that anymore.  This was the first time I've ridden up Clay Ridge Road since I switch over to a compact drive train.  The lower gearing really helps towards the end of a warm ride.  No going back to standard gearing now...."
Norman Smeal writes: "...Great day for a ride, unfortunately, the weather did hold out for us.  I was hoping for at least a shower or two. I thank Shane and Matt for pulling me up the hills; the 39 x 21 was not the best gear selection for this ride.."

Shane Beake writes:  "As far as Don's comments "the fresh asphalt on Lommason Glenn Road made it seem much flatter, almost coasting uphill...."  I certainly didn't feel like I was coasting uphill.  Not sure what he has in his water bottle, but I think I'd like to have some.  The Fox Gap climb even at 7:45am was very warm, I'm glad it didn't come in the real heat of the day..."

Janice Chernekoff has posted a nice ride report on her blog at:
http://jchernekoff.wordpress.com/2010/06/08/riding-the-college-hill-200/
... she has some other good posts there, including her BMB report that I'm looking forward to reading.


If you have any other comments, stories, or pictures to share, you can post them on the message board or forward them to me.
The next event will be the Hawk's Nest 200k at the end of July.  During the interim, I'll be scouting out some route tweaks to the EM1000k which will be run this August.  I'll also be working on the routing for the Endless Mountains Brevet week scheduled for the end of September:
http://users.rcn.com/trosenbauer/EM_Week200K.html
*** Original Post ***
I've heard from a dozen or so riders planning to clip-in for the June 5th 200k.  It looks like we'll have a rather hot and humid day on tap.  There are also some thunderstorms in the forecast, but it looks like they might hold off until later in the afternoon (and will hopefully provide some relief from the heat).

We'll be going up Fox Gap at mile 26, and with the early 6AM start, the temperatures should be manageable.  But there are still plenty of other big climbs on course, and it would be a good idea to bring along an "ice sock" (long cotton tube sock, or leg warmers tied off) to keep cool.

There will be plenty of stores on course where you can replenish the sock with ice, and drape it over your neck -- a stop in Belvdere at 46.8 would be a good place to fill your sock before the Lommasson's Glen climb at mile 49.

You should also replenish your icesock in Bloomsbury (mile 62) for the climb up Milford/Staats (mile 62.4).

There is a long, exposed stretch of road along Rt 29 starting at mile 73, but there should be plenty of places to resupply before then.

I'll have cold water and some Endurolytes available at the start on my porch.

At the finish, stop at the WaWa just past mile 125.7 and get a receipt (...for that icecream you've been thinking about for the last 50 miles).

There will be a post ride gathering at Morici's, right across from the WaWa near the finish -- they *do* serve cold beer!