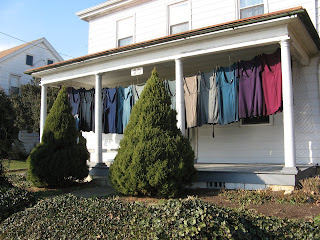 For those considering taking-up this particularly difficult challenge in the New Year, here is the post describing the history-making record showing of last January:
http://parandonneurs.blogspot.com/2010/01/schuykill-to-susquehanna-pa-dutch.html
Have at-it, if you dare...
Brevet Cards & Cues
As this is a 'free ride', I will only have a limited number of spare, unassigned Controle Cards and Cue Sheets available on a first-come, first-served basis.
To assure that you have a Controle Card reserved in your name, notify me BY NOON THURSDAY at rexycarpenter@gmail.com of your intention to post Saturday morning. Also, remember to print & bring with you your personal copy of the cues from the PA Rando site link; if you cannot do this, again contact me by noon Thursday and I will reserve a copy for you.
Ciao,
Riccardo
Posted by Rexy at 10:44 PM No comments:

Details for the January 1,2011 PA Dutch 200k have been posted at:
http://users.rcn.com/trosenbauer/R12ClubJan2.html
Organizer Rick Carpenter, and fellow PA Randonneur Mark Kaufman recently completed a check-out ride.  RIck posted a brief report and some pictures at:
http://www.flickr.com/photos/rick_carpenter/sets/72157625520157729/

In order to celebrate the start of the 2011 season, there is no registration fee for this ride (although a current club membership is still required).

As noted on the event page, there is a diner near the start/finish to meet and top-off before you clip-in. And our organizer, Rick Carpenter, will be hosting a post-ride gathering at his house.

So far, I heard from the following riders planning to start off the New Year by clipping-in for this event:
-Rick Carpenter (organizer)
-Mark Kaufman (volunteer)
-Doug Haluza
-Guy Harris
-Don Jagel
-George Metzler
...If you're planning to join us as well, send an e-mail confirmation to organizer Rick Carpenter:
rexycarpenter@gmail.com

Posted by Tom Rosenbauer at 8:59 PM No comments:

December 2010
Congratulations on all those hard-earned brevets -- collectively, we officially tallied 104,510 Km in completed brevets.  For the second year in a row, those results pushed the region to over 1000 points in the RUSA standings, one of only a handful of regions to do so. Thank you for clipping in and being a part of that success.  But of course, none of those brevets would've been possible, if not for all the volunteers who stepped up and helped out:
- Ron Anderson (PA1000 overnight controle)
- Dan Barbasch (PA1000 overnight controle)
- Rick Carpenter (Advisor, R-12 organizer, PA Fleche, PA600 preride & overnight controle, PA150/200 BBQ)
- Carrie Clamp (PA200k BBQ, PA400)
- Jud Hand (PA150/200 BBQ)
- Guy Harris (PA1000 course sweep & overnight controles)
- Bill Fischer (Scouting)
- Don Jagel (R-12)
- Jim Logan (PA1000 overnight controles)
- Andrew Mead (Advisor, R-12 organizer)
- George Metzler (R-12 controle)
- Maile Neel (R-12)
- Bill Olsen (Advisor, R-12 organizer)
- Curtis Palmer (R-12)
- Bill Slabonik (PA 200/300)
- Gilbert Torres (PA1000 finish)
- Christine Torres (PA1000 finish)
- Len Zawodniak (R-12, PA600 overnight controle)
The volunteers can attest to the fact that rider safety is the primary concern for each event.  But despite all the safety precautions, this year there was a sobering reminder of the risks inherent in our sport: George Swain was severely injured by a distracted driver who hit him from behind.  Thankfully, George is now back on his feet and is hopeful of a complete recovery.  You can follow along on George's road to recovery and deliver your get well-wishes at his blog:
http://thehudsonvalleyrandonneur.blogspot.com/
As George writes in his inspirational blog, randonneuring is one outlet to explore "…what is humanly possible."  This year, a number of riders completed many notable accomplishments -- too many to list completely -- but some selected ones I'd like to share with you include:
- Ixsa Gollihur officially completing her first brevet, despite coming up a bit short on three previous occasions (including her very first brevet, which was the infamous January R-12 event with 40+ MPH winds and temperatures in the teens).
- Daniel Aaron, Cecilie Adams, Dan Barbasch, Jonathan Clamp, Ed Dodd, Patrick Gaffney, Judson Hand, Don Jagel, Eric Keller, and Bill Olsen are all Eastern PA Super Randonneurs -- Well Done!
- Several riders completed their R-12 series.  Of note, Mark Kaufman book-ended his R-12 with a pair of events: his very first brevet ever was the snowy R-12 December event in 2009, which until the following January, had set the mark for epic winter conditions.  He joins Eric Keller as one of the few riders to earn an R-12 starting with their very first brevet ever.  And yours truly, completed a hard-earned Eastern PA R-12 series that included January's tough winter conditions -- thanks to fellow riders Andrew Mead and Len Zawodniak for helping me finish that one!
- Don Jagel tallied the highest number of kilometers with 4500, just nipping Bill Olsen by a mere 240k … probably because Bill opted to ride a 1200k somewhere instead of a PA event!  Don participated in all but 2 events on the Eastern PA 2010 schedule: January's R-12 and the Fleche.
- Jud Hand, Guy Harris, and Bill Olsen have the distinction of completing a PA-5000, which consists of the following Eastern PA events: PA SR series, 1240k and 1000k, a Fleche, and 900k in other PA brevets, all within a 4-year period.  Jud Hand and Bill Olsen have the further distinction of earning their PA-5000 within a 12-month period.
For 2011, it will be a very busy year with PBP and several domestic 1200k's to choose from.  The region will be offering many brevets for qualification and preparation including two complete SR series. In addition to a regularly scheduled SR series, a second one is being offered in a compressed “brevet week” format.  But we need some new volunteers to step up and take their turn at the front (and perhaps allow some of the regular volunteers to sit-in for a while).
-Tom Rosenbauer
RBA
Posted by Tom Rosenbauer at 7:19 AM 1 comment:

Preliminary results for the Dec. 4 Le Retour du Stillwater 200k have been posted at:
http://users.rcn.com/trosenbauer/PA200k_Results101204.pdf
... please let me know of any corrections or other issues.  Results will be sent to RUSA later this week, and then become final, pending RUSA approval.
Temperatures at the start were around 28F.  The "Mostly Sunny" weather forecast did not materialize..instead, it was a decidedly mostly cloudy day, with a brisk northwest wind making the mid 30F's feel much chillier.  But the few times the sun manage to poke through the clouds was very welcome.  And for the 3rd year in a row, we had some snow for the December event -- although the brief snow showers were hardly comparable to the epic all-day snow storm from last December:
http://www.njrando.com/forum/viewtopic.php?f=11&t=443#p1451
28 of the 28 starters made it around the course within the time limit, for another 100% completion ... congratulations to all the riders, for this excellent result.  Depending upon how many finishers the LA region had for their December 200k dart, the PA region just might nip them and move into 7th place in RUSA points:
http://www.rusa.org/points.html
At any rate, the 1000+ RUSA points racked up by Eastern PA riders is an excellent result, and a milestone that only a handful of regions reach -- well done, and thanks for being a part of this success!

Of note, Ron and Barbara Anderson completed another R-12 -- well done!  Alan Blanchette also officially completed an R-12, although he actually completed rides for 13 months in a row.  His first event was a permanent last December, that was not officially recognized, due to a misplaced brevet card.
Also of note, Kieran White completed his first Eastern PA brevet and John Silkowski completed his very first brevet, ever.  In doing so, John proved once again, that being a strong, fast rider helps compensate for other shortcomings, including no cue sheet and flat lander gears!  John was highly motivated to mash those big gears up the many short, steep climbs, in order to hang with riding partners, Walt Pettigrew and Jon Levitt (who he counted on to lead the way).
George Metzler writes: "...I thoroughly enjoyed the ride today.  The route was well designed and the cue sheet was top notch. After the long (but gentle) climb up Tunnel Road, John Fuoco and I had a blast on the fast and scenic descent down Sweet Hollow Rd..."
Don Jagel writes: "...Thanks for putting together the brevet yesterday. The Stillwater route works just as well in the reverse direction.  The Pizzeria in Milford is a good controle in the reverse direction, allowing
for a good place to warm up and a quick replenishing of the fuel supplies before the final leg back to Portland.  There was even a brief snow flurry just to make it really feel like December...."
Special thanks to Bill Olsen, for organizing the event and also to Jon Clamp, for leading the way with the sign-in sheets.
If you have any other comments, stories, or pictures to share, you can forward them to me.
This concludes the 2010 Eastern PA brevet season...validated brevet cards and a season recap will be going out in the mail over the coming weeks.  Happy holidays, and hope to see you clipping in again in 2011, for a busy PBP year of brevets. The 2011 brevet calender kicks off with the traditional PA Dutch 200k on 1-1-11, organized by Rick Carpenter.
Posted by Tom Rosenbauer at 2:29 PM No comments: