13 riders clipped in for July's Hawks Nest 200k. Preliminary results have been posted at
http://users.rcn.com/trosenbauer/PA200k_Results130713.pdf
... please let me know of any corrections or other issues.  Results will be submitted shortly, and become final, pending RUSA/ACP certification.

As visiting DC Randonneur Maile Neel noted: "...We could not have been more fortunate with weather, threading the needle between sweltering heat and pouring rain ...".  Although the heat and humidity started to kick-in the last 20 miles or so,  there hardly can be any complaints, given the steamy June and July we've had so far, and the 1-week heat wave in the forecast as I write this.

I know there's always first time for everything, but quite remarkably, after 9 editions going all the way back to 2009, the string of 100% completions for the Hawk's Nest 200k was finally snapped.  The streak was broken by no other than Gavin Biebuyck who typically is among the first finishers, but this time recorded his very first DNF ever on a PA brevet.  But he did so with a spectacular mechanical.  In looking at the bright side, if something like this had to happen, better now than up in Alaska on the BWR1200k which is where Gavin will be headed this week.  And he is certainly to be commended on his resourcefulness on figuring out a way to get back on your own power, as detailed in the following account from Gavin:

"... From what I can tell my rear derailleur broke at the plastic body surrounding the upper pivot mounting bolt (the bolt/spring was still attached to the frame hanger after the incident) and the derailleur then hit the fender stay (breaking it) and then the frame seat stay (bending it).  The rear tire exploded immediately after the derailleur break with a 6" tear in the tire and inner tube - the tire could not be booted and I had to DNF after a couple hours of searching for a replacement 650B tire size.  See attached photo showing damage to frame (steel Boulder Bicycle frame built by Waterford), showing dropout/hanger still aligned (with replacement SRAM Apex deraileur we found at store) and showing the broken Campy Champ Triple derailleur on the floor next to the bike (plastic body on a Campy - what is the world coming to!).
I was riding fairly fast down the hill from the Promised Land Exxon controle and I rolled over the rumble strips in the road when the incident occurred.  I don't think I ran over any debris but looking at the damage I have to believe that I hit something to have caused this or something got caught in the chain causing the derailleur cage to stick/rotate/break.  The chain was intact - we had to use pliers to remove the master link at the shop when replacing the derailleur.  The derailleur jockey wheels were both attached so not a failure here.  I had replaced the chain Friday - brand new SRAM with connex link so chain does not seem to blame.

Found a nice bike shop in Hawley (Sawmill Cycles) - manager Mike Johnson was nice enough to spend lots of his time trying to track down tires in my 650B size, selling me a derailleur that had to be removed from a bike for sale, meeting me at 6 pm to exchange the rental bike for my bike which I left behind at their other store in Honesdale. After I found the bike shop after walking/scootering the bike a few miles into Hawley we spent some time evaluating options - no Campy stuff so ended up using a SRAM Apex which surprisingly actually shifted OK with the Campy 10-speed bar-end shifters - at least 5-6 cogs seemed to be usabe - I only was counting on having the 2 chainring gears after this workaround.  Surprisingly no spokes broke (some were bent) and I managed to true the wheel sufficiently to fit it with some bending of the rear steel triangle. The shop then had their sister shop in Honesdale deliver a spare 650 tire which turned out to be wrong size followed by a mountain bike 28.5" tire - too fat for the frame.  All this took 2-3 hours so by the time I decided to rent a bike it was too late to make the next controle - the rental was at their Honesdale shop.  The owner of the stores, Dan Corrigan likes to restore antique bikes so I got to see a most interesting 1950 Swiss Army bike (single speed, built like a bomb with a wheel lock, drum brake, all kinds of bags, old style dyno front/rear lights, etc.)

The trip back to the Water Gap was about 50 miles from Honesdale but was quick because mostly downhill - Route 6 to Route 402 - rental was an old Redline cross bike (the owner used to race on this bike and was kind enough to lend to me) with skinny tires that flew.  Route 402 was a little busy until I-84 but was then a nice ride south all the way to Route 209.

I learned a few things: (1) carry a spare tire when you use obscure tire sizes other than 700C!; (2) a 650 tire (like the small tires some Tri bikes take) is smaller than 650B; (3) some new mountain bikes have wheels sized at 28.5" and these are in fact 650B but the knobby tire they had could not fit between the chainstays on my frame (unlike the 29ers that are really 700c); and, (4) carry an extra derailleur!

...Thanks to Don Jagel for helping me track down a bike store and being patient while my SPOT tracker probably threw him for a loop as it traveled 15 miles northwest to Honesdale as I got a ride to the other bike store to pick up the rental..."

Special thanks to organizers Don Jagel and Bill Olsen  who ran the whole show from start to finish, and handling the "Unexpected Circumstances".  This allowed me to to catch up on EM1240 preparations and keep several other balls I'm juggling right now, from dropping on the ground.  Bill is of course, is headed out to the Big Wild Ride 1200k which is starting next weekend -- you can follow his progress with PA SPOT Tracker #5 at this link:
http://bike.talloakfarm.com/spot_map.html


Best of luck to all them for a successful, and safe ride.

Next up, is the Endless Mountains 1240k -- Volunteer opportunities have been posted at:
http://www2.mysignup.com/cgi-bin/view.cgi?datafile=em1240k_2013

*** Update #2 (7/12)  ***
Hopefully, the cold front that came through last night and pushed out some of the humidity will hang in there for Saturday. Although the forecast is calling for some scattered showers and increasing humidity, it certainly promises to be one of the better days for a bike ride than we've had in a long time.  And looking ahead to next week, more heat and humidity is again headed our way.

The Water Gap diner has promised to have the grill fired-up by 6AM, so you can top off with a good breakfast before the start.  Organizer, Don Jagel will be meeting you there at the start to send you on your way.  And fellow organizer Bill Olsen will be meeting you at the finish.  Please note the parking instructions posted on the event website:
http://users.rcn.com/trosenbauer/WaterGapParking.pdf

And of course, the message board should **always be monitored** for any last minute updates or changes.

*** Update #1 (7/8)  ***
Don Jagel completed a volunteer preride this past weekend and sent the following ride report:

Overall, road conditions were good, with no major obstructions, or detours.  During my ride, traffic was light, even in Port Jervis.  Several locations riders should take some extra caution include:

Mile 0.0: A construction zone at the very beginning of the route on Broad Street, before turning onto River Road.  The traffic is squeezed into a single lane, so be aware of any inattentive drivers.

Mile ~43.0 On Kimble/Martin Road (about 43 miles), which is the road that passes all the big satellite dishes, I did notice a pothole/collapse starting to develop over a culvert.  This hole is currently only about 8 inches in diameter and more than 1 foot deep, and will probably grow over time.  No big deal, and easy to avoid.  Most riders will probably not even notice it.

Mile ~95:  Along Jager Road (about mile 95) a partial road collapse has traffic squeezed to the left side of the road for a short distance.  Be aware of traffic coming down the hill towards you as there is limited space.

Mile ~125.1  At the end of the ride, as Old Mine Road passes under Rt. 80, there is a construction zone that is set up with concrete Jersey barriers.  Be careful passing through this area and be sure you stay in the travel lane (towards the left), as it is possible to end up on the wrong side of the barriers.  Also be aware that there are several grooves in the concrete roadway that could potential catch the tire of an unsuspecting rider.  There is no shoulder to the road in this area making the sharp left hand turn onto the sidewalk over the Delaware River a bit more difficult if traffic is heavy.

Based on what I saw, the upcoming ride should be quite an enjoyable July ride.  A good portion of the route is shaded keeping hot temperatures somewhat bearable.

*** Original Post ***
With the hot summer weather upon us, the July 13th Hawk's Nest 200k course will be heading north into Promised Land, where the temperatures are typically several degrees cooler.  Most of the route is shaded, which will also bring some relief from the heat.  Riders typically finish this course about an hour faster than other Eastern   PA 200k's.  Event details are at:
http://users.rcn.com/trosenbauer/R12ClubJul1.html

If you liked to join the roster, please send me an e-mail by Thursday.  A volunteer preride is planned for this weekend, so be sure to monitor the website and PA message board for any updates, as always.

Course Notes:
-If you've never been across the Rt 80 bridge near Water Gap, it's a little bit tricky.  You need to look for a sidewalk/ramp about 50 yards past the Rt 80 underpass which you will cross under.  The picture below shows the ramp on the left, which is in between the road you will be traveling (on the right) and Rt 80 (far left): 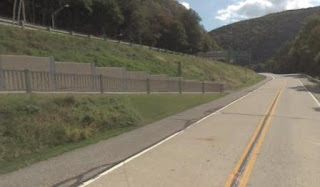 The Water Gap Diner will be opening at 6AM if you'd like to top off with a good breakfast before the start.

Reminder: Parking is behind the Water Gap Diner -  Directions are posted here:

Posted by Tom Rosenbauer at 11:00 AM No comments: