The cuesheet has been updated to draft 9 (4/26/11) with minor clarifications from Guy Harris' volunteer pre-ride (Thanks Guy, and well done!).  The following is a summary of the changes as reported by Guy:


75.5mi
I would mention to riders that this turn has a lot of gravel.  It is also a bit blind from the right so if you are tempted avoid the gravel by letting the turn swing wide it could be an issue.

102.1mi
Might add a note about the bad angle, rough tracks here.  It could also serve as a spotting cue.  I think this is a pretty close mileage.

105.2mi
The road sign lines up with Hickory well, Berne Dr. not so well.  It is really almost a straight/diagonal over Berne.  I think this cue should work as written though:


(The map below illustrates this tricky turn): 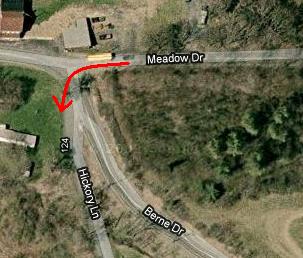 232.9mi
There is a bridge that was under construction.  I was able to ride straight over it.  No problem at all.  But, there is heavy equipment everywhere and there were drill holes in the middle of the deck.  [Although] the work-site looks active...no one would bother a rider going over at the times we'll use it, of course.


Note: The course has not been changed, with the presumption that the bridge construction will be passable by cyclists.  However as a contingency, if the bridge is NOT passable, the map below illustrates an alternate route around the construction: 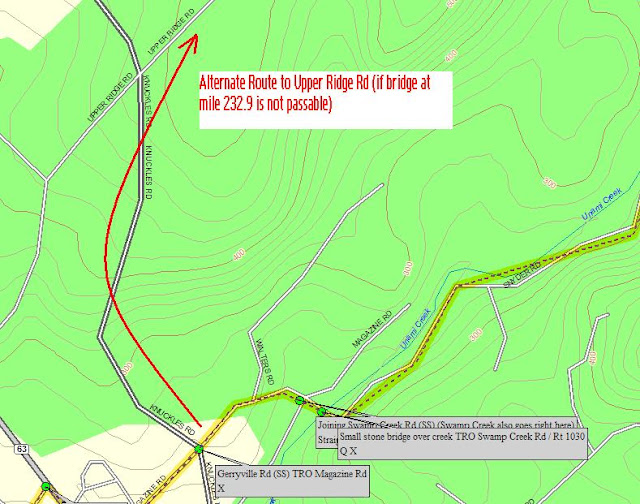 Additional Volunteer Pre-Ride comments:
...Made it back to the hostel at 1:39 for a total 20:49.  Not my best but not too far bad either.  This course can kick your butt.  I was not prepared for the heat after Jonestown,especially after the previous stretch of rollers.  It went from cloudy cool and nice to a relative furnace all at once at Jonestown.  Plus, the wind was at its worst on this stretch.  I think the main problem for me was accumulated dehydration - I was still 7 pounds light this morning!  First heat of the year will do that.   The course is in good shape.  The Swamp Creek section is a fantastic ride that time of night, sometime I have to see it during the day.  This is a nice way to finish the route.  I don't think I saw a car between Rt29 and 313.


- Ladies will be staying in the FAMILY Dorm


- Early arrivals (before 9PM) will be staying in the WOMENS Dorm


- Later arrivals (after 10PM) will be staying in the MENS Dorm


The hostel dorm is pretty full, so please try to arrive as early as possible and get your bunk ready as soon as you get there -- this will minimize the disruption of those trying to sleep.


Reminder: park your car in the big parking lot half way between the entrance and the house which will be off to your right as you arrive.  The few parking spots near the house are reserved.

I'll be at the hostel around 7PM on Friday night.


The cuesheet has been updated to draft 8 as of 4/20.  There will probably be one additional revision that will be posted early next week, after the volunteer pre-ride (which is scheduled for Monday).  As always, be sure to check back on the website and message board for all updates.


If you're headed to PBP, you'll need a PBP-compliant vest.  It'd be a good idea to get one before you head over to France, so you can get used to it. We plan to have PBP-compliant vests in various sizes available at the 400k start/finish so you can check out the sizing.  Additional details and an on-line order form has been posted at:
http://pbpfaq.blogspot.com/2011/04/pa-randonneurs-pbp-style-reflective.html
...We'll probably be placing our order shortly after the 400k.


Course Notes:
The 2011 edition is largely based on last year's edition, with the notable exception of a major route tweak to include portions of Andrew Mead's Hawk Mountain 200k from last September.  Also for 2011, I'm hoping to avoid the +90F temperatures we had last year!


The list of registered riders (and hostel reservations) has been posted at:
http://users.rcn.com/trosenbauer/PA400Regs.pdf


PA Randonneur members can join the roster (and take both the early registration and $5 member discount) by sending me an e-mail confirmation.