Preliminary results for the Hawk's Nest 200k have been posted at:
http://users.rcn.com/trosenbauer/PA200k_Results100515.pdf
... please let me know of any corrections or other issues.  Results will be submitted to RUSA in a couple of days, and then will become final pending RUSA/ACP validation.

With nearly ideal weather conditions, and a course that is perhaps a bit kinder and gentler than many of the other Eastern PA 200k's, all 18 starters made it to the finish well over two and half hours ahead of the time limit.  First finisher Don Jagel just missed the course record of 7:43 (held by Greg Pedano and Len Zawodniak) by 7 minutes.  That record was set on very similar weather conditions: generally cool weather with a strong northwest wind that was a real boost for the run into Port Jervis along Rt 97.

Incidentally, the first couple of brevets back in 2007 were routed along Rt 97 in the other direction, from Port Jervis to Barryville.  As I recall, we'd typcially get to Port Jervis in the early afternoon just in time for the westerly winds to kick up and make that stretch a real upwind slog.  In addition to the favorable winds, the direction to Port Jervis from Barryville generally has a better shoulder, especially in the narrow section near Hawks Nest.

Special thanks to Ed Pavelka, for carrying the sign-in sheets and Andrew Mead, for helping out at the finish.  And thanks for all the contributions for the benefit of the Water Gap Diner ... altogether, $265 was raised.

Larry Brenize gets my vote for the "Iron Stomach" award.  I met up with him at the Port Jervis diner.  As I waited for my black and white milkshake at the counter, Larry was working on a deluxe cheeseburger with all the fixings that looked like it weighed in around 1/2 lb.  By the time I finished my milkshake, the burger was gone, and Larry was then working on a rather substantial chicken sandwich (again with all the fixings).  I'm not sure how he managed to get up the big climb in the DWG park, after all that!

Don Jagel writes: "Boy, what a beautiful ride.   The weather, woods, views, rivers; wow!  ... Route 390 is really great being in the woods with the nice rock outcrops and occasional views, particularly just north of Skytop lodge. ...  Egypt Road and Gumbletown Road, connecting Route 390 to Route 420 were new roads for me.  Nice find. I haven't ridden along the Lackawaxen River from Kimbles to the Delaware River since the late '80s.  I love that stretch of river, and also the northern Delaware River.  ... The views from the overlooks along Hawks Nest are some of the most spectacular in this region and alone make this ride worth doing.  After quick stops in Port Jervis and Layton I got to my "favorite" climb along Mine Road which just reminds you that you still have to work a little to get to the end.  All in all, spectacular!  ..."

Andrew Mead writes: "What a great day for a ride.  Congratulations for holding the nasty weather demon at bay for a day. The route was beautiful and reminded me why I like the towpath along the Lackawaxen River down to the Roebling Aquaduct so well.  It was much more enjoyable in the downhill direction.  Winds didn't seem to be as challenging as predicted.  The boost down Rt 97 was superb.   The Water Gap NRA is always a treat.   Here's a link to the GPS for the ride.
http://ridewithgps.com/trips/41532

Joe Kratovil writes "... Many thanks for putting on this great ride.  My friend Al and I enjoyed it immensely.  The route has the nicest scenery of any brevet I've been on so far.  We also enjoyed the company of many other riders we met along the way...."
Joe's complete report is posted here:
http://mellowyellowbent.blogspot.com/2010/05/hawks-nest-200k-number-one-of-two.html

Christine Oh was among the several first-time riders.  Christine and riding partner Harold Axelrod are both training for the Lake Placid Ironman this summer.  Christine writes: "...Just wanted to say 'Thank you' for a memorable ride on Saturday.  I was telling some of my tri-friends about the sport of Randonneuring and many have not heard of it, as I had not until Harold introduced me to it.  I must say after having spent time with the group, I have a new found respect for the sport of cycling.  To me, the many riders that partook in this event, being pure cyclists, were the most friendly, down-to-earth people I have ever met.  It's hard to believe we climbed 7,000 feet that day, yes, I remember it was hilly, yet the scenery helped me to forget and made it more bearable..." 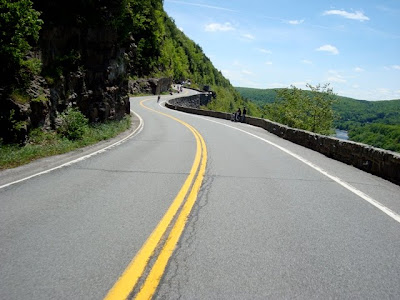 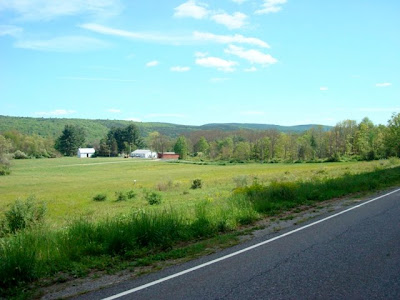 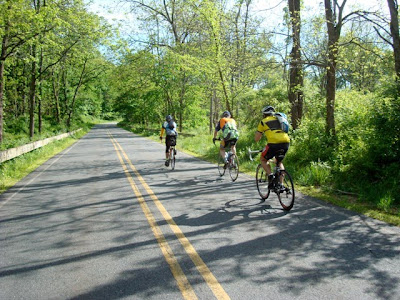 If you have any other comments, stories, or pictures to share, post them below or forward them to me.

Next up is the PA600k this coming weekend.  The 400k loop on day 1 covers much of the Hawk's Nest 200k route.  However, at Dingman's Ferry, you will head over to the PA side of the Delaware Water Gap park, for some easier terrain back to Water Gap.  If you are planning to ride and haven't registered yet, let me know via e-mail, and you can still take advantage of the early registration discount (which has now expired on the Active.com online registration).