Out of 13 starters, nine extraordinarily tough randonneurs  braved mountains, wind, cold, rain, and moonless nights to finish the Endless Mountains Liberty Bell 1000K. In fact, they crushed it -- or rather they CRACKED the EM Liberty Bell with sub-70 times. It's an amazing achievement to finish this event, but to finish sub-70 hours surpasses amazing. Chapeau to these tough nine. Bravo!

And congratulations and well-done to all who had the confidence and strength of character to even attempt this audacious challenge!  Preliminary results have been posted to the website.  Please review the results and let me know if they align with your memory.  The results will be submitted to RUSA after review and will become official once certified.

The ride began with an audax-style tour of Center City Philadelphia paced by Patrick and Cecilie Gaffney on their tandem.  There was a control at Independence Hall near the Liberty bell, where riders stopped to take pictures and have there cards stamped. Such a tour would have been impossible during normal hours, but at 4AM the roads were practically empty and the beautiful city could be admired without worrying about the traffic.

After that pleasant beginning, the party was over. The first day of the Endless Mountains series of brevets is among the most difficult of routes. Riders knuckled down to do the work.

Unfortunatel, two riders DNFed because of crashes early in the event. At roughly mile 84 as the rain began, there was a stretch of road where the oil on the surface combined with the first mist of rain to make a downhill curve slick as ice. Two riders crashed here, Mimo DeMarco and Charles Coldwell, although several riders reported that they almost crashed.   Mimo seemed to be hurt worse and was evacuated by ambulance to the hospital, but turned out to have nothing broken and was released the next day. Mimo's bike didn't fare as well. The handlebars were broken along with other damage.

Charles Coldwell had road rash, and a de-trued rear wheel, but was concerned about some back  pain. He was evacuated by the organizer to the nearby train station where he returned home.

The rain got worse and worse into the evening of the first day, and the temperatures dropped. Several riders sought some impromptu rest during the first night as the cold rain wore on them. Travis Berry ditch napped for this purpose, sleeping in a lightweight bivvy. He gave it high marks for keeping him warm despite the wet conditions. What brand of bivvy was that Travis? I want one.

Dawn Engstrom found a roof to shelter under, protected from the rain as she napped, but awoke to find she was at the muzzle of a shotgun. This shelter she found was the entryway roof of Marchio's Florist and Greenhouses,  which is pretty much the only civilized structure on the soul-sucking gravel climbs of Great Bend Turnpike. Dawn apparently tripped the security motion detector and the owner, who had been robbed several times recently, confronted the sleeping randonneuse with his 12-gauge. Quickly recognizing that he was dealing with a wayward traveler in need of help rather than a criminal, the owner unlocked the shop for Dawn to sleep in, got her a blanket and a warm drink. Thank you Marchio!

Just a few more miles down the road, Ed Felker and Steven Kunsak chose the Flying J truckstop at the I81 interchange as their sleep spot. As a way to get warm, one of them doffed the wet cycling gear and lounged comfortably in a Flying J hoodie purchased at the gift shop.

Of course, the goal for sheltering the first day is the overnight hotel in Owego, NY. Past history with the Endless Mountains events has shown time and time again that those riders that can somehow make it to the first overnight will generally finish the event. Control captain Bill Fischer with the assistance of Bill Olsen created a warm and welcoming reception for exhausted riders that were able to reach Owego.

Speaking of questionable shelter, there was some pre-ride concern that the second overnight, the Aderi Hotel, was a sub-par sh*thole that would be too disgusting to be acceptable. As it turned out, most thought the place was rather nice (albeit a little run down) and the rooms adequately clean and comfortable. Control captain at the Alderi, Steve Schoenfelder and his SO Susan Arisumi, put together a top notch buffet of vegan chili (with meat/cheese option), rice, and other goodies for riders staying at the overnight.

Maybe the only real annoyance at the Alderi was the labyrinthine entrance navigation through the breezeway and around the pool. To mitigate any confusion, Steve channeled his inner graffiti artist and bombed the whole place with PA Rando signage.

No riding in Central PA is "easy" but after the challenges of the first day, the second and third days of the EM1000 are more forgiving. Along with the moderating terrain, the weather also moderated. There was some wind initially, and the evening temperatures dipped to the 40s, but generally speaking day two and three offered a considerably better cycling experience. Finally, the riders were able to enjoy the beautiful scenery this region has to offer. 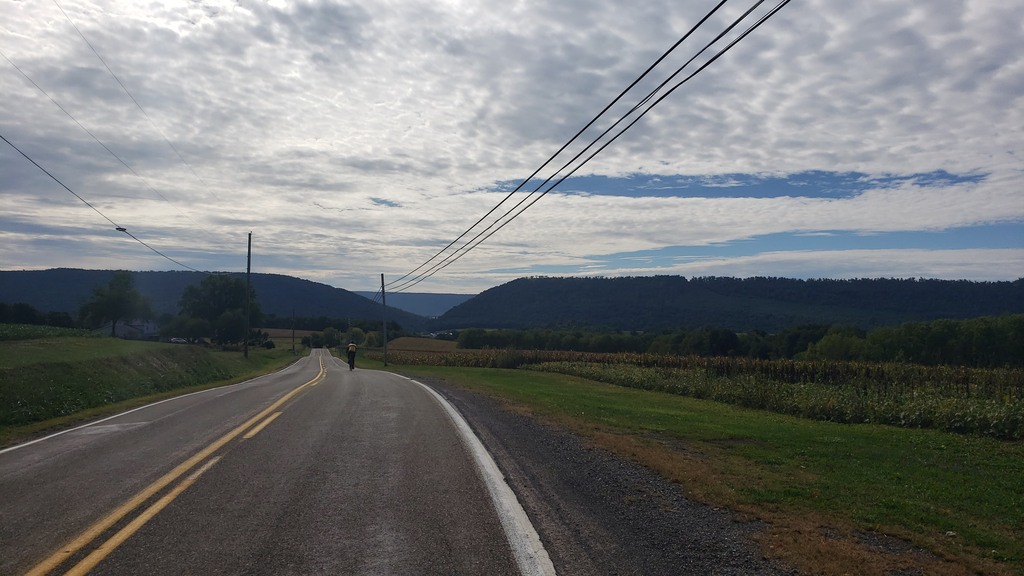 First finisher Ben Keenan was a model of efficiency and perseverance, achieving his fast time not by riding fast so much, but rather by avoiding unnecessary downtime. This was his first event over 600K but he rode it like a seasoned grand brevet rider.  Kudos Ben!

Dale Houck was riding well on day three when it began receiving credit card fraud alerts on his cell phone. As it turned out, some criminal had broken into his car parked at the start finish and stolen a backpack containing some of his credit cards. After some anxious moments, calls to  the police, insurance companies,  etc... Dale somehow was able to shake off this real world distraction and went back to riding strong and finished along side Misha Heller and Jose Blanco.

Darren Bartels gave the organizers some concern at the first overnight when he slept almost three hours past the closing time, but Darren clearly knows what he's doing. His strong legs easily made up that deficit and Darren finished the overall event in good time with everyone else. 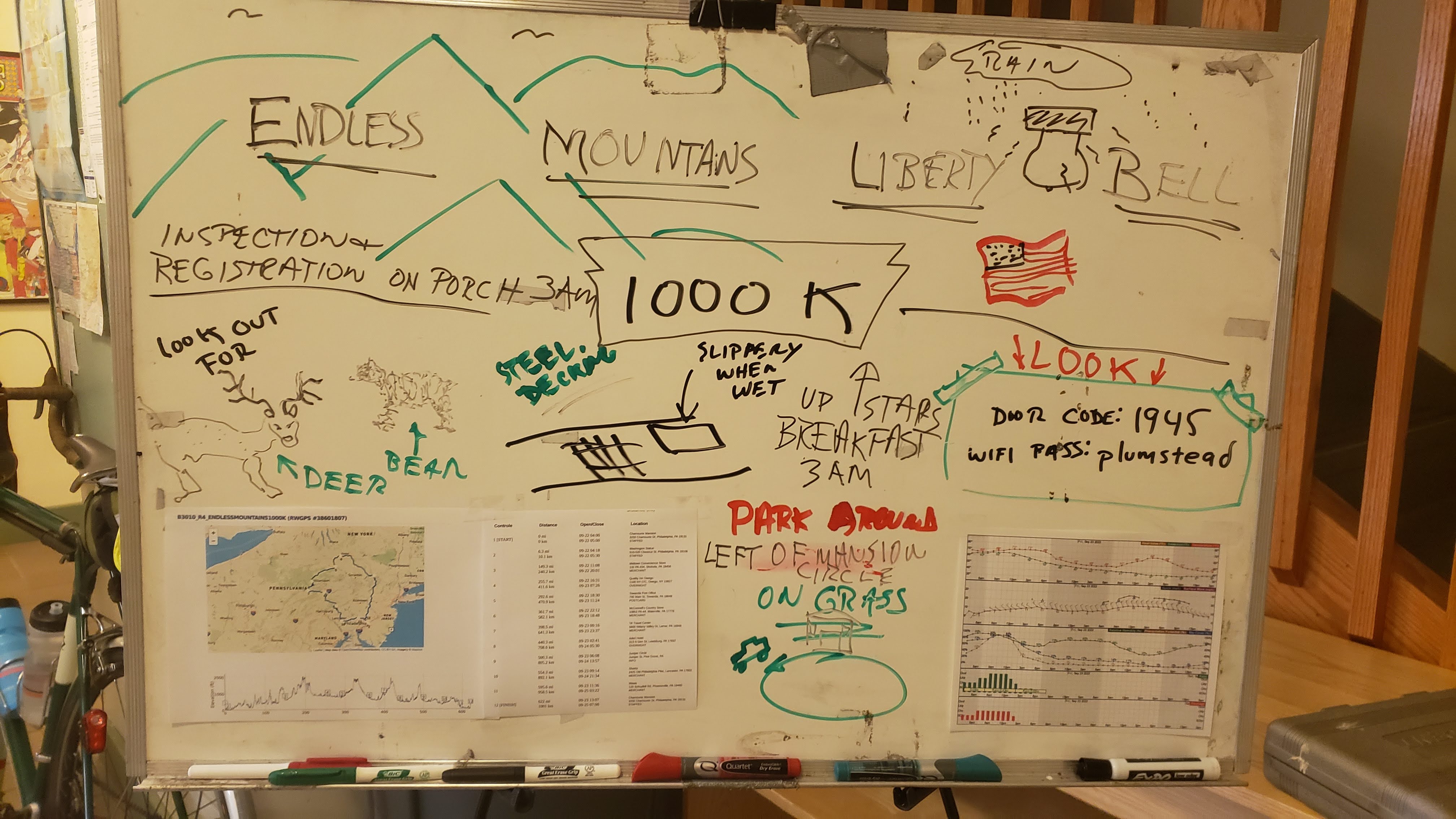 The Volunteer team supporting this event was world-class pro. Each of the volunteers was an experienced grand brevet rider who took on the responsibility supporting a significant part of the event and handled their part of the job with cool efficiency.  I've never before seen an event with such a high quality group of volunteers. The main control captains were

Assisting these captains were

It's a truism that quality randonneuring events aren't possible without volunteers. And super-quality volunteers like these lead to super-quality events. Thank you one and all for your service.

Darren Bartels has an extensive ride report on Strava.

Great event, it was fun even when it was something else completely!

Big applause for all who rode, including our intrepid pre-riders and Chris and all the volunteers. All the best to Chip and Mimo as they recover.

I've uploaded my photos to a Google Drive folder. Feel free to use with credit to me, other than the one of Steven and me that was taken by Darren!

The challenging route made for an epic ride. I really enjoyed the climbing and scenery. My favorite section was the stretch between Liberty and Waterville. The slight downhill gradient, mountain and valley scenery, and quiet roads made that a highlight of an event that was full of great riding. On the pre-ride, Iwan and I were lucky that the rain we dealt with did not bring along cold temps or wind. Chapeau to the riders for dealing with the cold, wet, and windy conditions on their first day. It was a lot of fun greeting and sharing stories with the riders at the finish. Great ride to all! 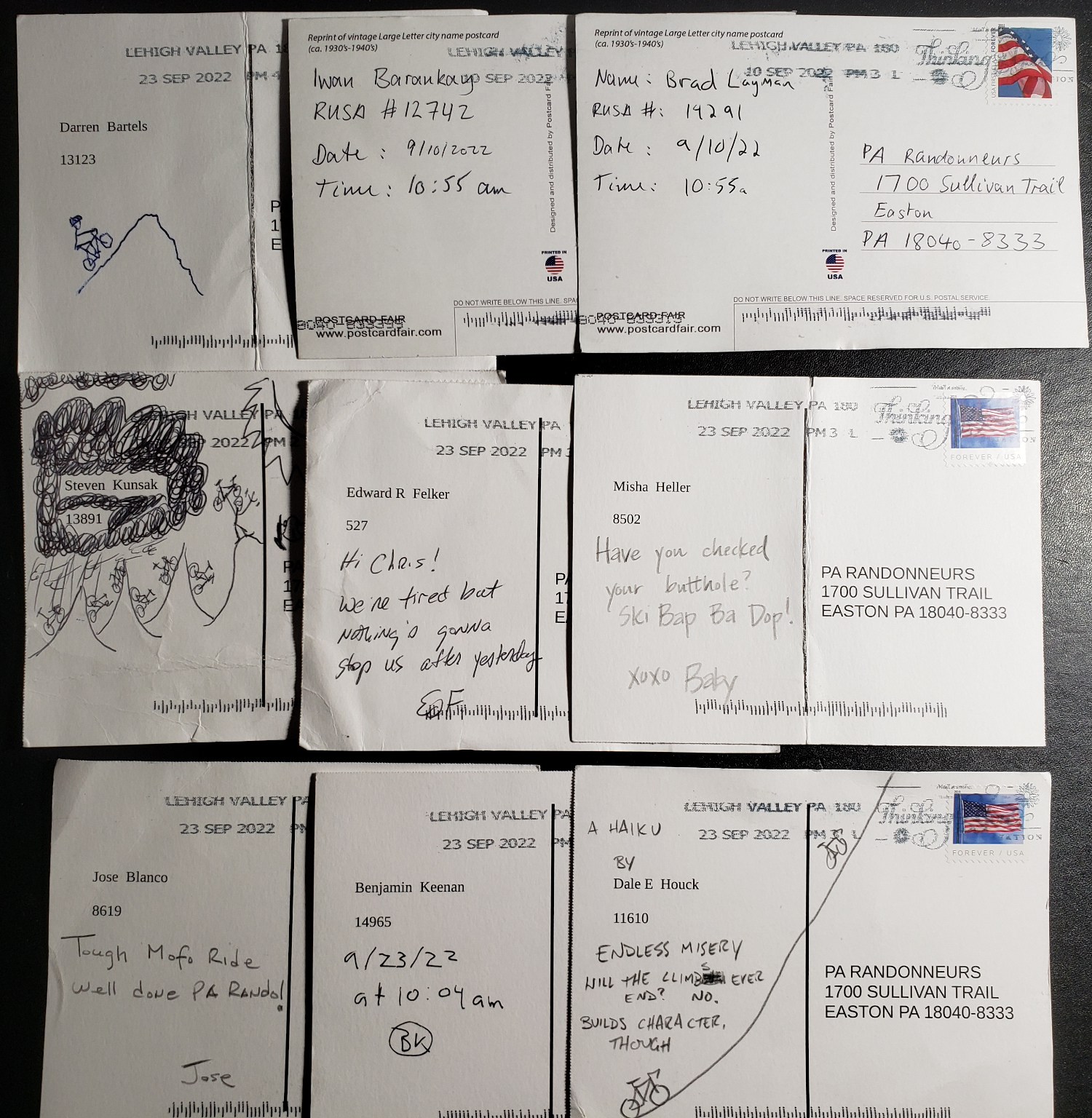 Next month, a much more accessible event for riders with less than liberty-bell-cracking stamina: the Fall Classic 150/200K at Cafe Metzler. This will be a special event as it also represents the first event for new RBA Chris Nadovich, as the EMLB1000K was the last event for previous RBA Andrew Mead who has served from 2016 through 2022. There will be festivities and amusing banter commemorating the passing of the RBA torch -- something you don't want to miss. It's your last chance for you to complain to Andrew about his courses, and your first chance to complain to Chris about his courses. Details for the 150K and the 200K are posted on the event website. We hope to see you there.