*** Update 3 (10/20) ***
John writes: "...Well yesterday my R12C came to an end. Since last month I learned that my cancer, which had been nicely suppressed for almost a year, was getting smart and growing again. So onto a new, more aggressive chemo regimen I went. Early last week I was down with a fever and wasn't up to par by yesterdays attempt at Crista Borras' North by Northwest perm out of Frederick. A chummy group of 14 set off on a cold blustery day into the North wind. It was evident to me early on that this wasn't my day. Discouraged, I decided to turn back after only about an hour but was encouraged to at least ride the 35 miles to Gettysburg and then head back. So this we did. Brother Art who came all the way from Florida with fiancé Rorie Anderson, as well as Mike Lewis, Greg Conderacci, and Andrea Matney rode into town, took our time truly touring the battlefield and enjoyed a non-rushed sit-down at a coffee shop before heading home with the wind at our backs.
The really nice thing was what a good time everybody had. Nobody cared one little bit that they didn't get official credit for the ride. Staying together seemed to be the only mortar we needed as a group.
So ends the R12C attempt on the sixth month. I hope to do more brevets, but will not get one in this month. But I really had a great time. I guess it is the journey after all...."

Congratulations to John on a fantastic R5-C streak -- as far as I know, he's the first to reach that inspirational accomplishment.  I'm hoping he will consider starting a new streak, and perhaps strive to better it. 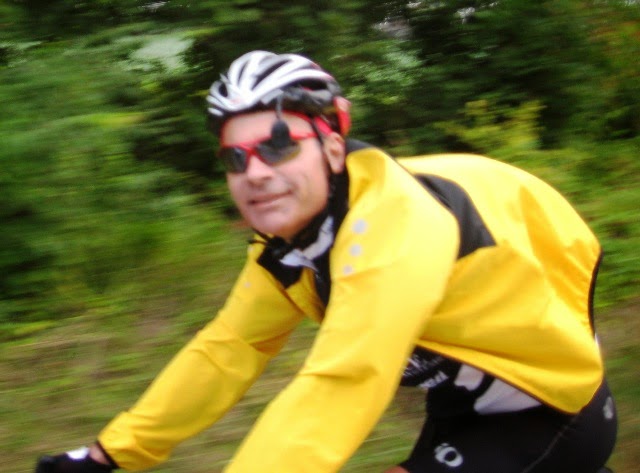 *** Update 2 (9/22) ***
John has now notched an R-5C with his completion of the Woodbine permanent.  John writes: "... Jon Erwin did a nice write up of our ride and he and Bill Beck did a stellar job of documenting it photographically... I was disappointed that Bob Casciato had to withdraw at the last minute due to an illness in his family, but was elated to have Joe and Jane Brown sign on the day before. Their kindness and good company seem worthy of more than just mere appreciation. Jon Erwin was a surprise, to me, late addition to our crew as well. So with my good old friend, and new randonneuring buddy Mike Lewis, our group of five set off on a surprisingly warm September morning. We would soon be joined by Bill Beck riding north from our turn around in Woodbine. As per my more recent 200s I was escorted by loved ones who also happen to be stronger riders than myself but who were happy to ride my slowish pace without any shows of frustration. I always had a wheel to sit on and a good story to listen to. Also as per my more recent rides I hit a physical and emotional low between the 50 and 90 miles marks. Not being able to do any training rides longer than thirty miles and being literally poisoned two weeks out of every four eats into my conditioning. Fortunately I have some neuro-muscular memory that kicks in and my body is able to accomplish with difficulty what it used to be able to do at the drop of a hat. And the final 40 miles or so see me rebound from my emotional ebb such that some joy if not downright elation emerges from the darkness to leave me with a pleasant memory of the whole affair. On this occasion the strong tail wind out of the South played a big role in our return leg. It is hard to envision carrying this on for another 7 months, so I take em as they come: one at a time.  The next one is also a permanent, Crista's North by Northwest out of Frederick on Sunday October 19th. There is already a small group of good friends committed including my brother Art who is coming up from Florida just for this ride. More are certainly welcome!  -John Fuoco"
Bill Beck's photos are at:
https://www.flickr.com/photos/wabeck/sets/72157647776782526/#
Jon's RideWithGPS data and photos are at:
http://ridewithgps.com/trips/3490081
... and Jon's ride report is at:
http://parando.org/JonErwin-1.pdf


*** Update 1 (8/31) ***
John now has an R-4C, with his completion of Eric Keller's "Happy Valley to Buffalo Valley" permanent in August.  Riding companion, Doug Haluza writes: "..The ride went well. Weather was perfect. We stopped at Brookside Bikes, an Amish bike shop in Mifflinburg. It's 3/4 of a mile off the route, but came in handy because I flatted in the lot at the start, and again in Rebersburg. ...Happy to Buffalo Valley is a really nice easy century route if you get a ride back from Millheim instead of riding those last 30 miles. ... you lured us in with this nice gently rolling course until we're tired, then lowered the boom at the end with some nasty little climbs in the Tussey Mtn. foothills! Were your ears ringing today? ;-)  ....."
John adds: "...  Eric, Doug doesn't mince words. And to be honest I joined in slinging invectives unfairly in your direction during the last 30 miles. Of course that was all part of the fun. Great course, lovely day​.. Thanks for putting it together for us. I may revisit it this winter...."
Mike Lewis: also rode with  John, and writes: "... I knew I was in trouble after saying halfway into the ride, 'This course is pretty easy.' On the ride back I rode in silence as I thought about the course design, choosing to heed the adage 'If can't say something good about someone, don't say anything at all.' But I will talk now now and throw your way a big "Thank You" for creating a course that made my second brevet such a rewarding experience. Great company, beautiful day, and a challenging ride through beautiful countryside...."

*** Original Post ***
John Fuoco sent me the following note:
"... I am interested in sending out a note or two about a couple of 200k perms I plan to do in the next couple of months and want to notify and invite other club members to join me. My goal is to do an R12 on chemo. So far its an R3. Don't put any bets down on me but then again don't bet against me either! I am hoping to corral some company with my old friend connections. As it is, I am sick two weeks out of four and unfortunately cannot do many of the R-12 200k's already scheduled by PA and DC hence the need to do permanents..."

Best of luck to John on his R-12C quest.  If you would like to join John on any upcoming rides, you can post a comment below or send me an email to get in contact with John.