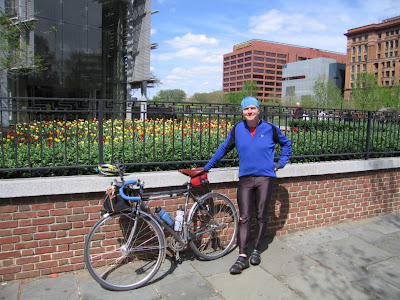 Local PA Randonneurs, Norman Smeal, Jon Clamp, and Gavin Biebuyck set out this past weekend, to Crush the Commonwealth -- a 400 mile challenge, to ride unsupported from Pittsburgh to Philadelphia:

Norm sent me the following ride report of his epic ride:

".. Gavin, Jon and I set out to Crushed the Commonwealth, starting 5:00 Friday morning.  We traveled to Pittsburg with the plan to show them what Eastern PA Randonneurs is all about.  When we hit the Gap trail on the Pittsburg end, I got a flat that slowed Jon and I down from the pack.  After fixing the flat Jon and I were making good time on the clay & cinder trail.  Somewhere before Connellsville Jon dropped off, and then it started to rain.  That hard pack clay trail turned into a sponge, making our way to Rockwood very difficult.  After leaving the trail, the real rain started to fall between Somerset and Bedford.  Luckily I was packing a dependable rain jacket. When I got to Bedford, I spotted a Burger King that I could get out of the rain and get some real road food.  A whopper never tasted so good.  Leaving Bedford with Breezewood only 20 miles down the road, and the rain slowed down to a drizzle and a strong tail wind made that 20 miles go by fast.  In Breezewood, I caught up to Gavin with Jon bring up the rear.  Leaving Breezewood, we set out to take the easy way using the abandoned PA turnpike instead of going over the mountain.  Now in a party of 5, we hit the first tunnel of the old PA turnpike at dusk and when we left tunnel number 2, it was dark.  I had difficulty keeping up with the rest of the group stopping to fix the handle bar bag, I lost them.  Getting to the end of the road, I couldn't find my way off the old road.  Consulting the maps on my phone was no help.  I did see that I got a call from Jon saying that he was going to stay the night in Breezewood with a fellow Philly guy (Bob).  I gave him a call and chatted, but there was no way I was going back over the old Turnpike to Breezewood to spend the night.  Eventually, I did find the access road off the old highway and made my way to Chambersburg arriving there around midnight.  In the true Rando spirit I used the Sheetz as my rest spot getting some sleep on the sidewalk outside.  Waking up about 2:00, it took me nearly an hour to thaw out, drinking hot water then coffees to caffeinate my system.  When I was leaving, another rider Sarah was just coming in, we made small talk as she fixed her flat tire.  Off I go with 150 miles to go, open roads and dry weather. Making York by 6:50, crossing the Susquehanna River at 7:50 then Lancaster 9:00, I knew I was getting close.  I have been riding alone without the whereabouts of my fellows Gavin or Jon.  Arriving in Morgantown on familiar territory home was near.  Checking the phone I found out that Jon had a major mechanical before arriving to Breezewood and had to drop out of the ride.  In the Morgantown Sheetz, a lady asked me how far I rode today; she lost it when I told her that I started in Pittsburgh Friday morning.  I arrived at the Liberty Bell before 3:00 pm Saturday, completing the ride in less than 34 hours, 380 +/- miles.  Checking my phone, I realized that Gavin was behind me the whole way since Chambersburg and finish right behind me.
What an epic ride. ..."

Jon Clamp sent the following report of how his ride did not exactly go according to plan:

"... I was just getting my second wind after talking to Norm on the phone from The Burger King just before Breezewood. Anyway going up a little growler hill before Breezewood and planning on at that point riding through as I was now warm and dry I heard a small clicking from the rear wheel. I stopped but could not see anything in the spokes or anything else that would indicate something catching in the wheel. Anyway I proceeded on and no sooner had I remounted and gone 10 yards that my whole drive train jammed up. I got off and looked and basically saw the "Perfect Storm" of Rando angst. Seen as though I was riding with Bob from the Philly bike shop Trophy Bikes he immediately diagnosed what had happened. So, on the GAP trail my chain had become dry with the gravel and rain blasting away the lube. At some point on the climb one of the side plates on the chain link had lifted away from the pin and was causing the clicking sound as it travelled through the derailleur cage and was why at 10pm at the side of the road with just a headlight and some fatigue I could not see the problem as it was almost invisible even to a trained eye. So what happened next was maybe predictable. The chain got caught in the derailleur cage as I was putting a lot of stress into the cranks on the climb. I pulled the derailleur from facing down vertically to horizontal facing the rear. This in turn pulled the derailleur hanger horizontal and into the cassette, the whole wheel jammed up, broke the chain in three places, cut the derailleur cage into two pieces and knocked the wheel out of alignment. Talk about a mechanical at night in the middle of nowhere.
Anyway, I managed to get the wheel out and true it up and cut the derailleur away. I had just enough chain left that Bob and I could piece it together to try and make a single speed, but without a tensioner. We pounded the derailleur hanger away from the cassette with a roadside hammer, otherwise known as a large stone. Once this was done (1 hour fix for two riders) we set off and I was quite confident that we may have got lucky as the bike seemed to be riding OK. The problem now was that the chain line was slightly off as we had to choose a cog for the length of the chain I had and we had nothing for tension or keeping a good chain line. So what happened was the chain kept jumping up to the next larger cog. This was severely stretching the chain, so much so that after several manual down changes by dropping out the wheel to shift the chain back onto the correct cog the chain finally gave out and essentially disintegrated.
This was now five miles from Breezewood, Bob rode on so that he would not be too late to check in at the hotel. So now I was down to straddling the bike and doing leg pushes and coasting where possible. To compound it all I had a rear flat two miles from the hotel. Finally at 1am I joined Bob at the hotel for a rest and a re-think on what could be done. Luckily Bob had a smart phone and we quickly found that there were no bike shops around for a potential interim fix that would let me finish . So I had my first abandonment in my Rando career. Should have put a new chain on, the one I was riding was about 2 years old.
Anyway my titanium frame will have to be sent away to have a new drive side dropout put in and a realignment. Anybody know who may do this locally (frame is a Litespeed).
Norm I can do the 300k pre-ride on a fixed or single but no gears!!"

Gavin sent me the following report: 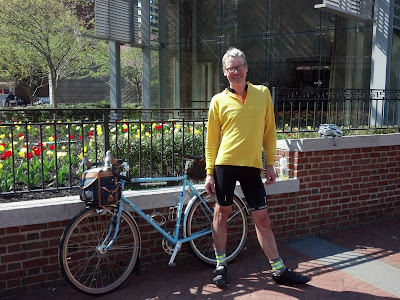 ".,,My second and last Crush the Commonwealth (please remind me of this next year!) – 385 miles from Point State Park in Pittsburgh to the Liberty Bell in Philly.  Finished this year’s CTC in 34:15 hours with bike racer Kris.  One hour slower than last year due to torrential rains in Bedford Friday afternoon leading to hotel stay for shower and 4 hour sleep in Chambersburg. I believe 20 or so finished (some late Sunday) of about 30 who started.  It is an unsanctioned race so no formal list of starters exists.  Finished in 4th place, 5 hours behind winner Tom Oswald, a bike frame builder from Mansfield, PA.  Below is a photo of Oswald on the Great Allegheny Passage (GAP) trail at about mile 60. 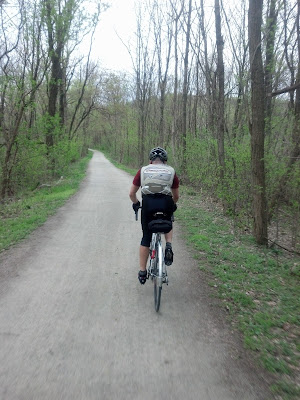 I rode with Oswald for about 3 hours (we were in second place at that point) until I dropped him just after Ohiopyle State Park at mile 78.  I rode the next 100 miles through Somerset and Bedford to Breezewood on my own.  I was so wet and cold at Breezewood I drank 5-6 coffees, ate a Sheetz burrito and Ben and Jerrys pint, and waited an hour or so for help - Oswald passed me at Breezewood.  Rode the last 200 miles or so with Kris, an amateur road racer from Easton.  We had a 15-20 mph west tailwind that pushed us to Philly by 3:30 pm Saturday. The first 103 miles on the GAP trail along the Youghigheny River is very pretty but when rain began at mile 90 the packed limestone turned to peanut butter.  The 15 miles south from Somerset into 30 mph headwind while passing the numerous wind turbines along the highest ridge in PA also sucked. ...

An entertaining but scatological account of the race from first woman finisher, Steph, can be found here:
http://stefannburch.blogspot.com/2013/04/ctc-2013.html
... Kris and I caught up with Steph at East Berlin 20 miles west of York at about 7 am.  She finished 2.5 hours after us on Saturday afternoon for the fastest woman finish ever – 36:42 hours"

Posted by Tom Rosenbauer at 4:17 PM