Preliminary results for the March 27 200k have been posted here. The results reflect a 15 minute adjustment to the starting time, due to delays from the rider meeting and the staggered start. Please let me know of any corrections or other issues -- results will be submitted to RUSA shortly, and then become final, pending ACP validation.

After a week of above average temperatures, another shot of cold Canadian air made for a chilly day of riding. Temperature's were in the mid 20F's at the start, only getting to the mid 40F's in the afternoon. But at least the skies were clear with plentiful sunshine.

Mile for mile, this is probably one of the tougher routes on the PA series. But the 35 riders that made it to the start proved even tougher, recording yet another 100% finish rate. Don Jagel made it to the finish first in just under 9 hours. Bob Casciato was not far behind, coming in just 6 minutes later. Bob, along with riders Patrick Gaffney, Judson Hand, Linda McAdams and yours truly, all participated in the 2003 edition of the NJ600k. As many of you know, the hilly segment of that particular NJ600k was largely based on what is now the PA200k. There was a good mix of veteran riders and newcomers, with some riding their very first brevet ever. Once again, a large group of riders from the NY Southern Tier came to ride, joining well represented contingents from Lancaster, NJ, and NY city. I was also impressed by the number of EM1240 jerseys I saw. One of those jerseys was worn by Michael Anderson, who came all the way down from the Boston area.

Adding to the variety of participants, 20% of the riders were female and there were 3 tandem teams. Of note, the tandem team piloted by Victor Urvantsev and stoked by Kate Marshall turned in an impressive result on a decidedly tandem un-friendly course -- they finished in 9:39 with the first group of finishers. And also of note, tandem pilot Patrick Gaffney made a marriage proposal to his stoker, Cecillie Adams at the top of Fox Gap (pictured below): 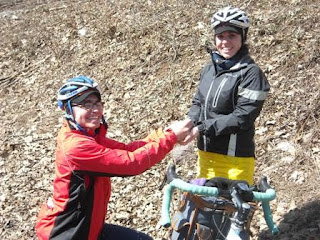 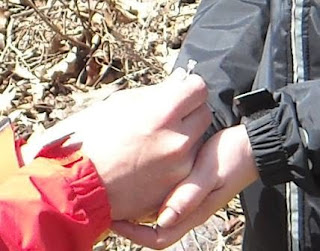 Best of luck to you both! And now that you have a wedding to plan, this link may give you some ideas.

Thanks to Bill Olsen for the picture of Patrick and Cecillie, and thanks to Don Jagel, for leading the way with the sign-in sheets. Special thanks to Jon Clamp's wife, Carrie, for helping with the post-ride BBQ at the hostel. It was great being back to our rando base at the Weisel Hostel -- I really enjoyed catching up with several of you I haven't seen in a while. And I appreciate many of the kind remarks I got on the course and event organization. One of the funniest comments was made by Eric Keller, who in trying to describe the part of the course where he had to turn around for a lost item, said it was the part where "... it went up, and then down, and then up again ..." And I think it was Dan Aaron who then quipped: "Eric, you just described the entire course!"

Other Rider Comments
Long time participant Guy Harris comments: "...Has to be one of the best 200K’s in the US...". Bob Casciato writes: ".... Personally, it was the most challenging of the 15 or so 200Ks I have completed. It was quite scenic with very light traffic….a perfect combination!! Andrew Mead writes: "...I'm glad you opted to keep all the climbs. Apparently I needed a refresher on a few of them. .... The challenge of the course makes the finish all the more memorable. Scenery was top notch. Grace Pineda writes: "...It was all great: route, terrain, pavement, cue sheet, people at controles & weather." Judson Hand has posted a good write-up on his Rando Training Blog.  Ron Anderson has posted a great write-up about the "Modest Proposal" on his DSSTRS blog.  Michael Anderson writes: "...By far the most challenging 200K I've ever completed. I'm glad I made it down to be a part of it. I enjoyed many of those hills, steep enough to get a good speed going, and short enough to not become overwhelmed...."  Kate Marshall has posted a great write-up on her Pscycles Blog.

If you have any other comments, stories, or pictures to share, you can post them on the message board or e-mail them to me.

Next up, is the PA300k (with a 200k option) in 3 weeks. I'll be updating the PA300 event page this week. Meanwhile, those of you planning on the Eastern PA Fleche need to finalize your routes and rosters very soon.

If anybody wants to claim the helmet left at the hostel, you can drop me a note and I'll ship it out to you.