For those (like me) who may have missed this back in October, congratulations to Gavin for hitting it big on the local Celebrity scene, and for his promotion of our passion: 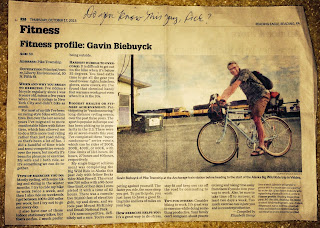 *** Update #1 (12/5/13) ***
Bob Dye will be greeting you at the start, and signing you in at the Milford Bakery start and checking your lights and reflective gear.  The bakery opens at 6AM, and offers some breakfast sandwiches made to order, along with other bakery items. Park your car in the big lot off of Church St -- there are "No Parking" signs posted at the lot, but PA Randonneurs has secured permission to use it for our event.  Bill Olsen will meet you at the pizzeria finish controle, but if you arrive before he does, you can get your card signed and left at the counter.  I'm keeping a close eye on the rain and snow in the forecast for Friday night and early Saturday morning.  At this time, it looks like the precipitation will clear the area before the start.  But be sure to monitor the website and message board for any last minute updates.

"....At mile 82.1, I did not see a sign for "Airport Rd.". There is a sign for "Pequest Rd.", which looks askew, but nothing for Airport. As the cue sheet notes, it is the "1st L" which we made. It is obviously Airport Rd., as there is an airport on your right a mile or so down the road. ... Also, Some extra caution is advised on the descent on Rte 579 in the dark at the top of Tunnel Rd. That section of road is a major deer haunt after dark. Also, descending Pattenburg-Little York Rd. is also a high volume deer area. The route is exceptional. I'm very familiar with the first 30 miles and the last 30 miles, having lived in Hunterdon, Warren and Northampton Counties most of my life. So, I'm looking forward to the ride... My take-away from this recon, was that I'll be doing some extra ascent training up in the Hunterdon/Warren hills over the next two weeks!"

Preliminary results have been posted at:
http://users.rcn.com/trosenbauer/PA200k_Results131102.pdf
Please let me know of any corrections or other issues.  Results will be submitted shortly, and become final, pending RUSA certification.

Last year, the November 200k had to be rescheduled because of Super Storm Sandy.  And the year before that, we had the Halloween snow storm that downed many trees and left much of the area without power. But this time around, we managed to continue the string of near ideal weather conditions we've had for the recent events.  Temperatures at the start were in the high 40F's and warmed up later in the day to the 60F's. Early morning sunshine gave way to some clouds later in the day, and a few riders encountered a brief spritz of rain. Some of the late changing trees managed to keep their colorful foliage despite all the rain and wind from the day before.

All 18 participants made it around the course in good time for another 100% finish -- well done!   Of note, Christopher Maglieri completed his first PA event, and joined fellow riders Tom Matragano and Peter Phillips to set a new course record of 7:58.  This trio obviously didn't linger too long at the controles!

Jim Holman writes: "...Thanks for organizing the Stillwater 200K this past Saturday.  It was another beautiful autumn day with great riding partners and, like you said, it was a very nice route.  I like how you scheduled this brevet and last month's brevet so as to take in as much of the fall foliage as possible..."

Mike Anderson, who made the long trip down from the Boston area to join us, writes: "...Thanks again, it was a great ride, and a great time!..."

The 2013 Eastern PA series concludes with the Retour du Stillwater 200k on December 7th -- we'll essentially be riding the same course again, except we'll start in Milford, and ride it in the reverse direction.  Event details have been posted at:
http://users.rcn.com/trosenbauer/R12ClubDec3.html
... as usual, drop me a note by the Thursday before the event to join the roster.